I’d always believed that Named Ranges in Google Sheets would only accept static ranges and not formulas like Excel, which makes them less powerful of course. (Check out the Named ranges sidebar and you’ll see what I mean. No place to add formula-based dynamic ranges in there.)

However, there is a clever trick using the INDIRECT function that DOES allow dynamic named ranges! 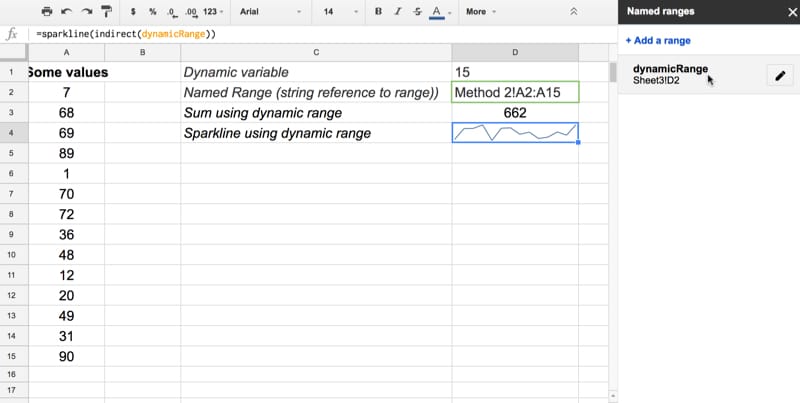 Using formulas in named ranges to make them dynamic

Step 1: Create a formula whose output is a range reference in string format, for example:

where cell B1 contains an integer that we control (typed or from a calculation).

So if cell B1 contains the integer 500 say, the output of this formula would be a text string as follows:

Step 2: Create a named range for this cell with the string in.

Click on the formula cell, click on Data > Named ranges... and give it a name, e.g. dynamicRange

Step 3: Combine this named range with the INDIRECT function to refer to this string range inside your other formulas, which gives you a dynamic named range.

For example, to create a dynamic sum we could do this:

Or a dynamic sparkline:

Once these are setup, if you go back and change the value in cell B1, the range will update and the formulas in Step 3 will also update.

How does the formula for dynamic named ranges work? 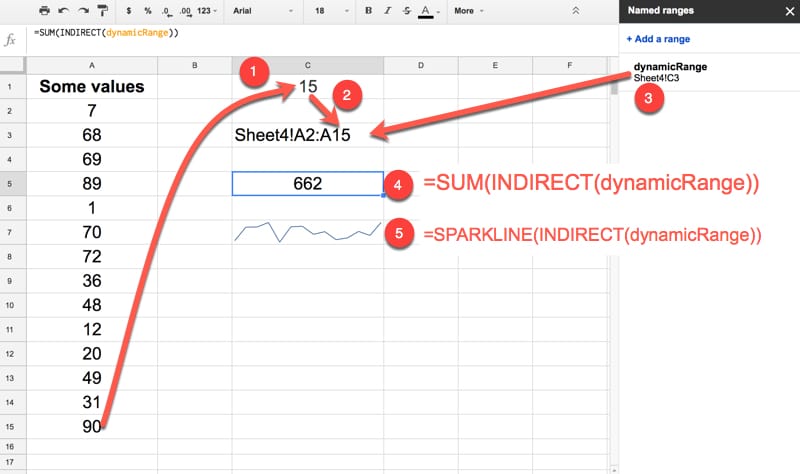 Dynamic named ranges! Woohoo! This is one of my all time favorite Google Sheet tricks.