This is a story about a bar, 10 regular folks and the world’s richest man. Somewhere along the way, we’ll seek to demonstrate the robustness of the different average measures, but more on that in a minute. 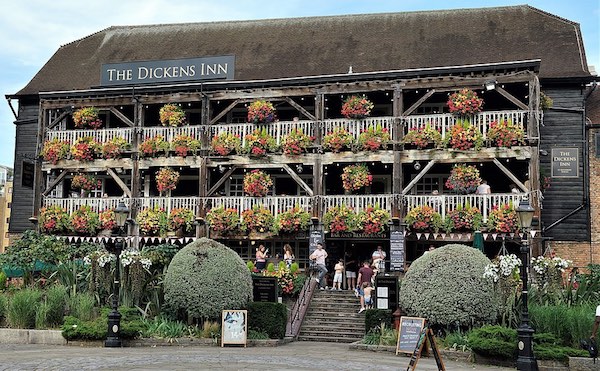 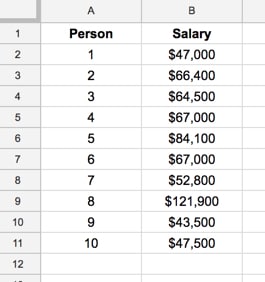 We then calculate the “average” salary, using the three different measures we know:

we calculate the mean — the classic average — of our data. This calculation is the total of all the values divided by the count of how many there are.

It’s the measure of “middle-ness” or “central-ness” that we’re perhaps most familiar with.

However, there are two other common average measures:

we calculate the median, or middle value, of our data.

If we have an odd number of values, this value is just the middle value that bisects our data into two evenly numbered groups.

If we have an even number of values, as we do in this example with 10 people, then the median is the mean of the middle two values.

we calculate the mode — the most frequent value — in our our data.

Note: if none of the values in your dataset occur more than once, then no mode can be calculated and the Google Sheets function will produce an error:

So far so good. 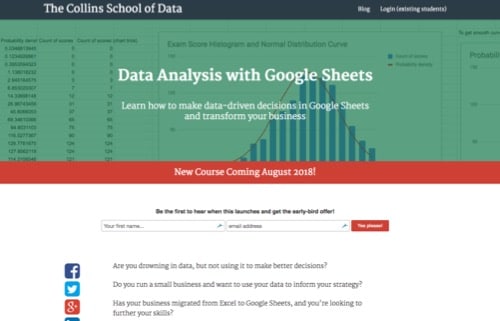 This is where we introduce the world’s richest man.

His name is Jeff Bezos and he’s worth approximately $120bn, that’s right 120 BILLION DOLLARS. It’s hard to fathom how much money that is, but suffice to say that quitting his lucrative Wall Street job to found Amazon 23 years ago has paid off handsomely.

For the sake of this exercise, we’re going to assume Jeff has an annual salary of $10 million dollars (the majority of his $120bn wealth is his ownership stake in Amazon).

Now, suppose Jeff has just finished some stressful meetings in London and decides to avail himself of a pint of beer. He just happens to choose the same pub as our 10 friends from earlier.

After the awkward ensuing silence and subsequent predictable astonished whispers (“He looks like… Is that…? Wait, is it really…?”), normal service resumes and Jeff pulls up a stool at the end of the bar.

He is subject number 11 in our dataset, which, if we include Jeff’s salary, now looks like this: 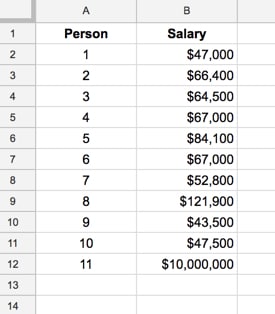 Whew, that’s an outlier if ever I saw one.

And it has a HUGE impact on one of our averages, but which one?

The effect of outliers on mean, median and mode

Taking our new dataset of 11 values above, let’s calculate the mean, median and mode again.

The mean has been skewed so dramatically by the outlier, that it’s become a rather meaningless number now. It’s highly sensitive to outliers.

However, look at the median, which has barely changed, and the mode, which hasn’t changed at all. The median and the mode are what we call robust statistics. They have not been skewed, or unduly affected, by the new outlier.

We’ve seen how the mean is sensitive to outliers, and this is its principal drawback. It’s not a robust statistic. As we saw in our example, it was skewed so much that the result was essentially meaningless.

The advantage of the mean are that it can be calculated on discrete (example above) and continuous data (e.g. people’s heights).

The median, being the middle value that bisects the dataset, is less affected by outliers, so is a better measure of central tendency when the data has outliers or is not symmetrical.

The mode, being the most frequent value, has the principal advantage that it can be calculated for numerical and categorical (non-numerical) data.

It’s also possible to have no mode (no values occur more than once, which can happen with continuous data), or two modes (bimodal distribution) or even many modes (multi-modal)