Here’s an introduction to Data Studio and a look at the more advanced features.

Do you work with data outside of Google’s ecosystem though?

I’ll go out on a limb here, and say, yes, most likely you do.

Many of us work with other web services and you want that data displayed in Data Studio. With the launch of native data Community Connectors, you can connect to your favorite web services and access data that lives outside the Google ecosystem directly!

What is a Data Studio Community Connector?


The easiest analogy is to think of a Community Connector as a pipeline between Data Studio and your favorite web service, where your data exists. Data Studio sends a request to your web service and it returns the requested data through this pipeline, so you can analyze and visualize it in Data Studio.

It means you can get your data into Data Studio.

It means no more messing around with a Google Sheet acting as a middleman for your data.

Simply install the Community Connector, and connect Data Studio to your data.

If you’re so inclined, and you know a little Apps Script and APIs, you can even build your own.

How to use ready-built Community Connectors

There’s a lot of new connectors available (with more becoming available all the time), and you can see them in the gallery here: 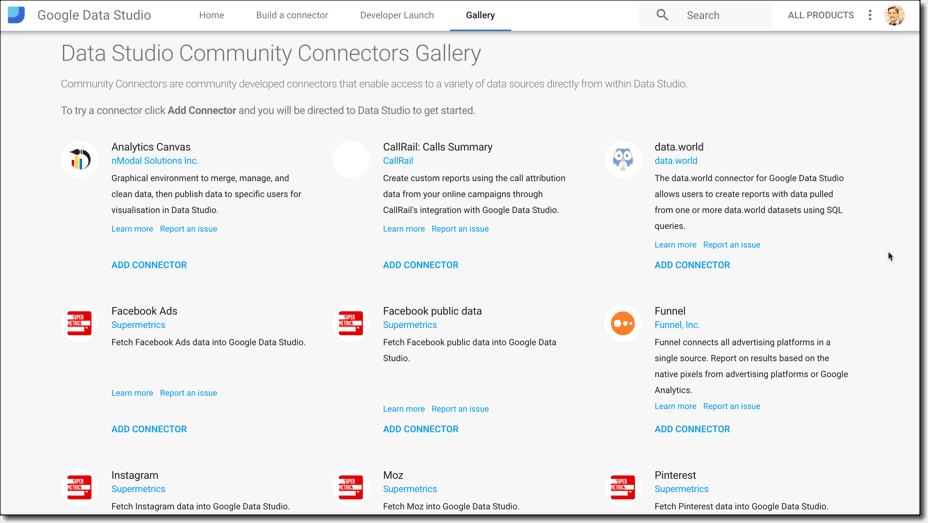 Select a Community Connector and add it directly to your blank Data Studio report.

For developers, you can also create and add connectors using Apps Script.

How to create a Data Studio Community Connector with Apps Script

This section is a quick introduction to Community Connectors from a developer’s perspective.

A Community Connector connects to an external API, which may or may not require authentication, fetches the data and passes it back to Data Studio.

I’ve been built two client connectors (this one is in the gallery) and various prototype connectors, and they’re awesome! It’s very cool when you see your data visualized in Data Studio.

Creating a Community Connector without authentication

It’s probably easiest to begin with a public, read-only API, with a simple data structure and no authentication to worry about.

There are four key functions to any Community Connector application and they:

The starting point for any Community Connector is a standalone Apps Script project.

Create one and in the Code.gs file delete the blank myFunction() function.

Any Community Connector will have a skeleton outline like this, showing the four key functions mentioned above:

The heart of the application is the getData() function, which takes a request from Data Studio as an input (basically what data is being asked for) and makes the call to the API to fetch that data.

Then it wrangles the data into the correct format for Data Studio (defined by the schema you’ve created) and passes it back to Data Studio.

Extra functions are required if you need to use OAuth 2 verification (see below).

Hint: Sprinkle the Logger.log() class liberally through your Apps Script code to understand how the data connector works. For example, adding a Logger.log(request) as the first line of the getData(request) function will show you the format of the request variable, which looks like this in the case of the GitHub Community Connector example:

This tells you any configuration parameters, what fields are being requested by Data Studio, and what those variables are called, so you can refer to them correctly in your code.

After writing the code, there’s a final step in the Apps Script editor before you can connect to your Community Connector from Data Studio.

You’ll need to add the dataStudio name into your manifest file, so the final file should look something like this:

You specify the name of your Community Connector in the manifest file.

Save your Apps Script project.

You should see the Deployments screen with Head Deployment listed as the initial deployment.

Click on the deployment name (Latest Version (Head)) or the Data Studio icon next to the Get ID link, which will show the connector link into Data Studio for this connector:

Click on this connector link to open up a new Data Studio report with this Community Connector added:

Use the Community Connector in Data Studio 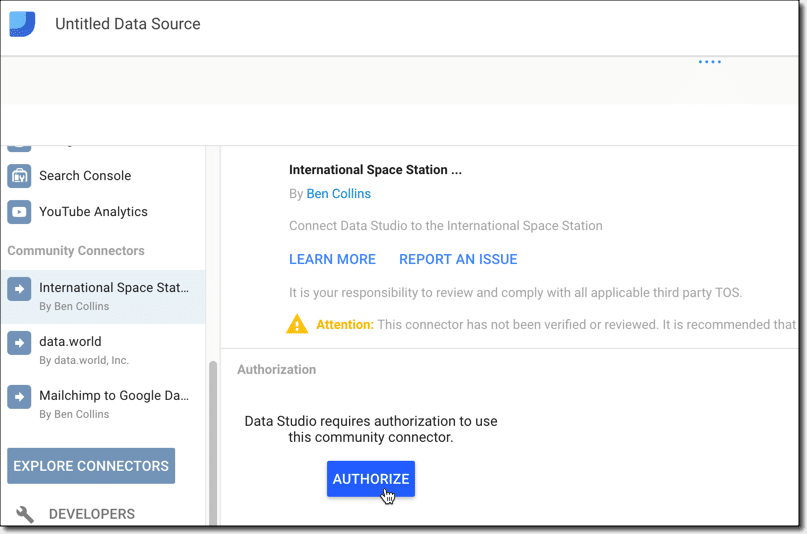 You’ll need to grant any authorizations required to allow your Community Connector access to the web service.

Now you’re back on familiar territory of Data Studio reports, where you can add the Community Connector data source to your report: 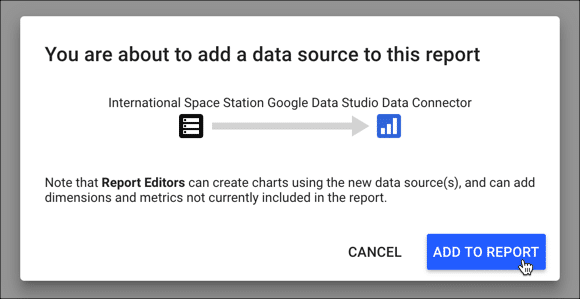 For fun, I tried plotting the current position of the International Space Station in a Data Studio dashboard, using the Open Notify API, a simple, public API not requiring any authentication.

The Open Notify API gives the current position of the International Space Station.

Here’s a screenshot of the final International Space Station Data Studio dashboard, with the red dot on the map showing the current position of the ISS:

When you hit refresh in the dashboard, it updates and the red dot moves on the map to show the current position of the ISS.

Want to see this Data Studio dashboard? Check it out here.

Here’s my code from this International Space Station API example.

Of course, most web services will require some form of authentication before you can extract data.

Thankfully, the hard work has been done for us with the OAuth2 Apps Script library.

Under the Community Connector documentation, there’s a lot of information on creating OAuth 2 Data Connector applications.

So the first step is to add this OAuth2 library to your project, via the menu Resources > Libraries... > Add Library

In addition to the skeleton outline above, you need to add a few extra functions to your Community Connector to handle the authentication:

So let’s see an example of an authenticated data connector, in this case with a connection to the GitHub API.

The code is very similar to this code in my OAuth article here.

For the GitHub dashboard, I wanted basic user data from one user endpoint and then my commit history from a different events endpoint.

So I did two UrlFetchApp calls, and added both packets of data to my data schema to return to Data Studio.

Once I had that setup I created a dashboard showing an overview of my account and the last year of my commit history: 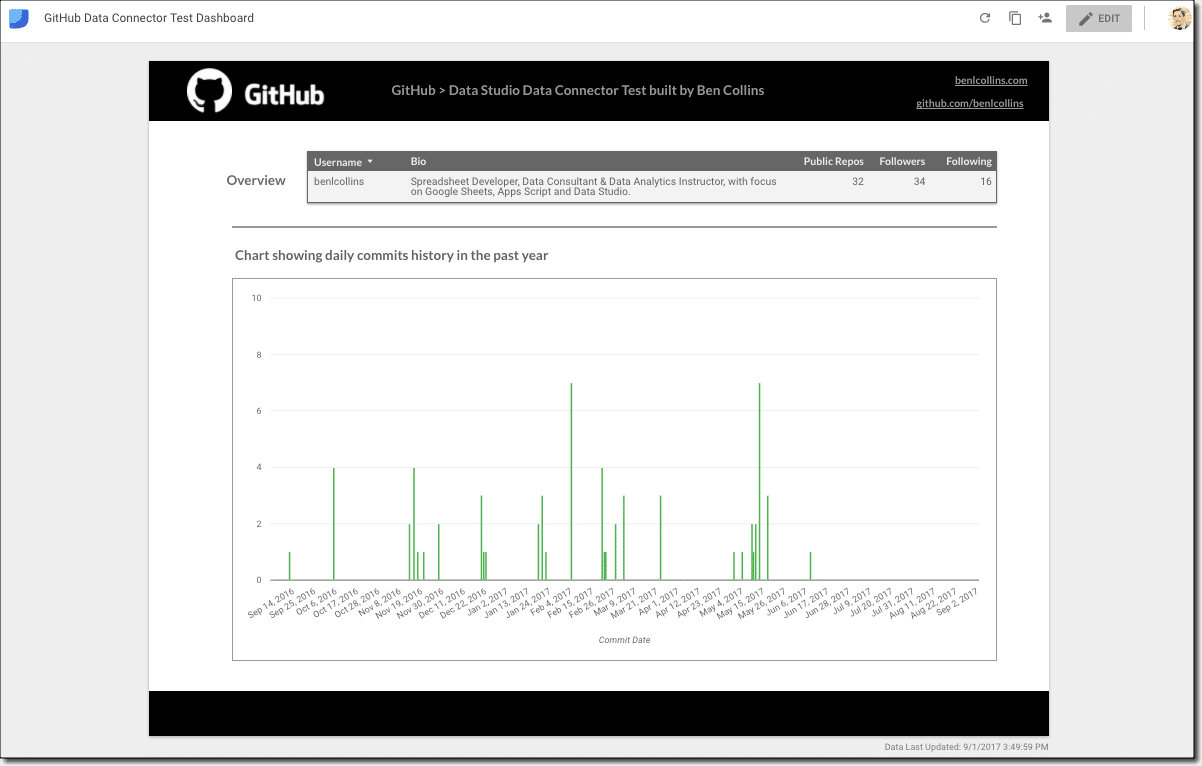 I’ll tidy up the code for this example and post it to GitHub soon.

Once you’ve created one authenticated data connector, you can reuse the same skeleton and workflow for your next one. Obviously the schema, API endpoints etc. will be different but the concepts are the same.

This is another authenticated data connector, which connects to MailChimp’s API so you can retrieve and visualize your MailChimp data, such as campaign performance, list growth and recent activity (amongst others).

Here’s the first page of a draft dashboard, summarizing email lists and campaigns: 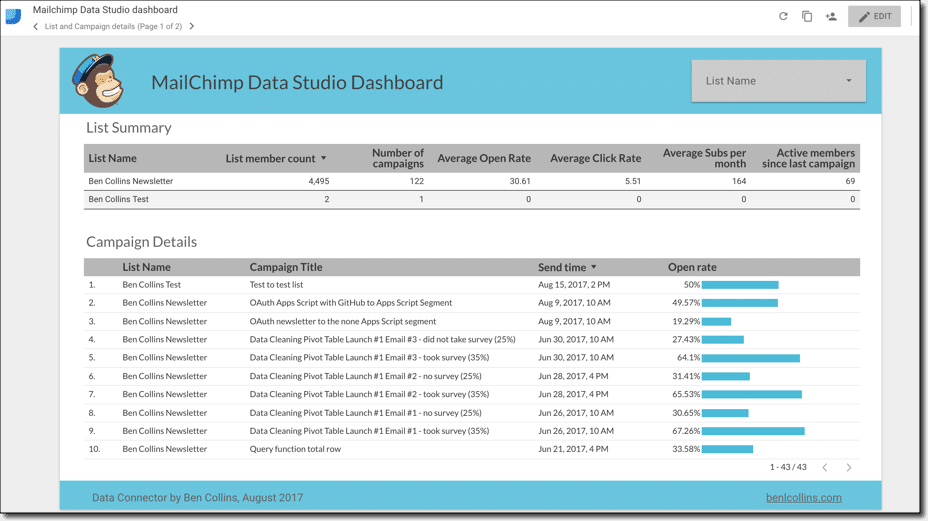 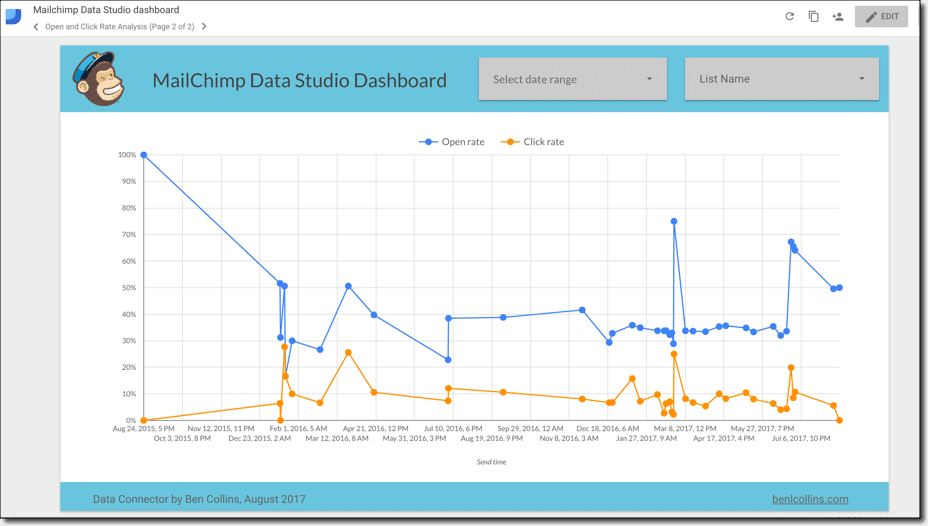 28 thoughts on “Community Connectors: Access all your data in Google Data Studio”