Text Rotation in Google Sheets allows you to angle the text up or down inside your cells, which lets you create some nifty looking headers.

This particular example was prompted by a recent question from a reader:

How do I make a diagonal line to split a cell, so that I can enter text into two triangular subdivisions?

You can’t split a cell explicitly, but you can use text rotation and formula-trickery to achieve this effect.

Looking at each piece of this formula in turn:

REPT(formula, 10) repeats the formula ten times, in this case it repeats the dash line ten times to create a long solid line.

(You can add as many CHAR(8211) as you require by simply changing the number of repetitions in the REPT function, to create the “best fit” line.)

The two column headings, Quarters and Regions, are then added either side of the formula.

Center align the cell and then, under the Format menu, rotate the text downwards: 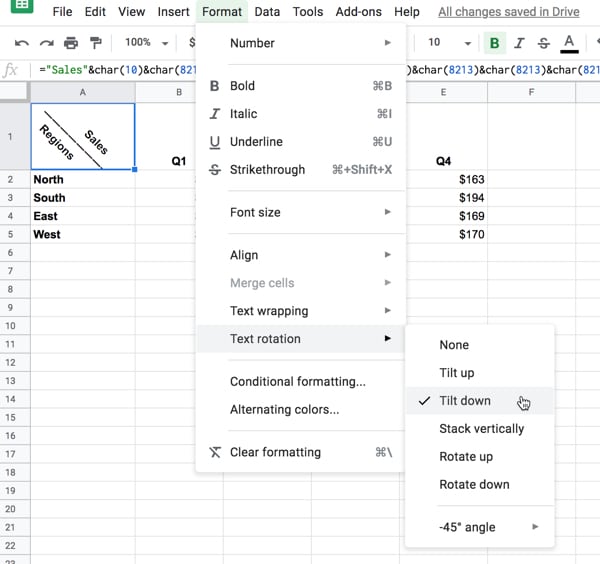 You can adjust the angle of text rotation to get the best effect.

Note: Similar to the caveat for merged cells, you should only use this method for formatting and not for analysis. Use it for presentation tables only, because it makes dataset column headings a mess for analysis work, like pivot tables or charts. Generally the labels in column A need their own column heading.

First, just type your text in the cell, using Ctrl-Enter at the end of each title to put the next title on another line in the same cell.

For the dividing line, enter this directly by copy-pasting a series of Em-dashes (—).