XLOOKUP matches a search key in a lookup range and returns the value from a result range at that same position. If XLOOKUP does not find a match, you can specify a default value. You can control the match mode, like other lookup functions, and even control the search mode. More on that below, but first let’s see a simple example.

Here’s a simple XLOOKUP formula that looks for the search key in column A and returns a value from column C:

It takes a minimum of three and a maximum of six arguments:

The value you want to search for.

The range to search. It must be either a single column or a single row.

The range to consider for the result. The return value is taken from the position of the matched value in the lookup array if the search key is found. The result range must match the dimensions of the lookup range.

This optional argument lets you specify what match mode to use. If unspecified, an exact match is used.

This optional argument lets you specify what search mode to use. If it is omitted, XLOOKUP defaults to searching the lookup range from the first entry to the last entry.

The different search options are:

Let’s see some more examples of the XLOOKUP function in Google Sheets.

If you omit the optional match mode argument, the XLOOKUP function will perform an exact match.

I.e. when you write it with only the first three arguments, a search key, a lookup range, and a result range, then it will look for an exact match. We saw this in the example at the top of this page: 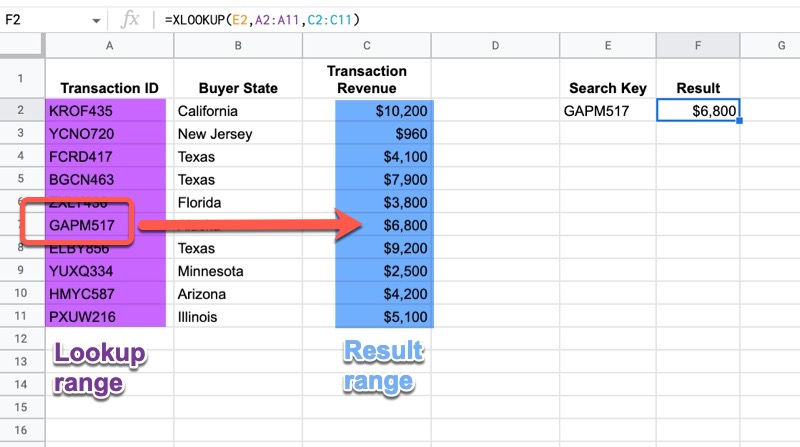 Now, we can specify a fallback value if no match is found. This is done with the fourth (optional) argument, e.g.

In this case, the search key “XYZ123” is not found in the lookup array (column A) so the XLOOKUP function returns the fallback missing value, which we set to “No match”.

Another benefit with the XLOOKUP function is that the lookup range does not have to be to the left of the result range, which is the case with the VLOOKUP (though there is a complicated workaround with array literals).

The formula does not change, but this time the result range is positioned to the left of our lookup range:

As you can see, it works equally well in our Sheet:

The fifth argument of the XLOOKUP function determines the matching mode. If it is omitted or set to 0, then an exact match is performed.

However, there are situations where the approximate matching option works really well.

Consider the case when our search key falls between two values in the lookup range. It’s not an exact match, but we might still want to return a result to say that it’s lower than X, or higher than Y. 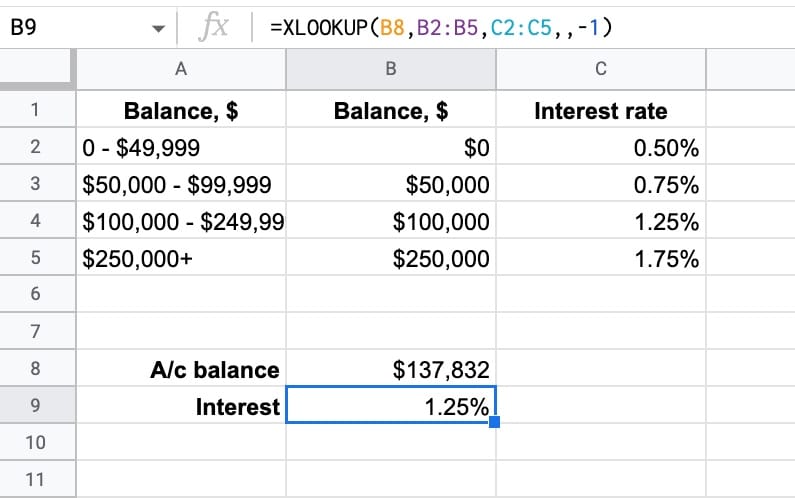 The XLOOKUP formula for this example is:

Notice the -1 as the final argument, which tells the function to look for an exact match and if it doesn’t find one, to return the value that is lower in the array.

One final thing to mention with this example, notice how the fourth argument is blank. This is where we can specify a “missing value” for when no match is found. However, it’s not required here because we’re using an approximate match anyway.

The tilde ~ is an escape character that lets you search for a * or ?, instead of using them as wildcards.

Let’s see an example that uses a surname to find the full name:

And another example that uses a surname to return transaction revenue from that row:

Both formulas are seen in the following image, with the first one in cell B17 and the second in cell B18: 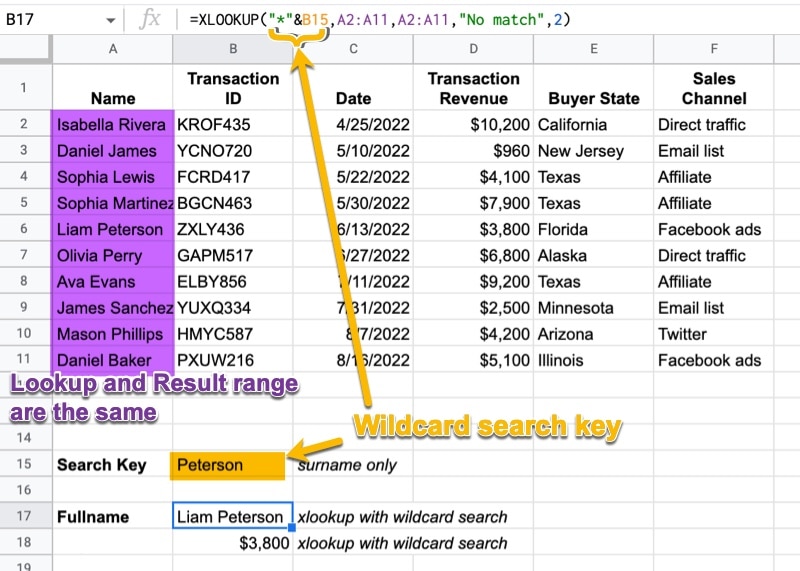 There are two important things to notice with this formula:

1) The search key is “Peterson”, but to use it in the XLOOKUP function, we first add the wildcard star character that matches anything before the “Peterson”:

Note, if there were multiple “Peterson” in this dataset this could cause an issue. In this case, you might want to try using the QUERY function or the FILTER function to return all the “Peterson” results.

2) The match mode in the fifth argument is set to 2, which indicates that this is a wildcard search.

XLOOKUP returns multiple results by specifying a result range with multiple columns (or rows if you’re doing a horizontal lookup).

This gives the result: 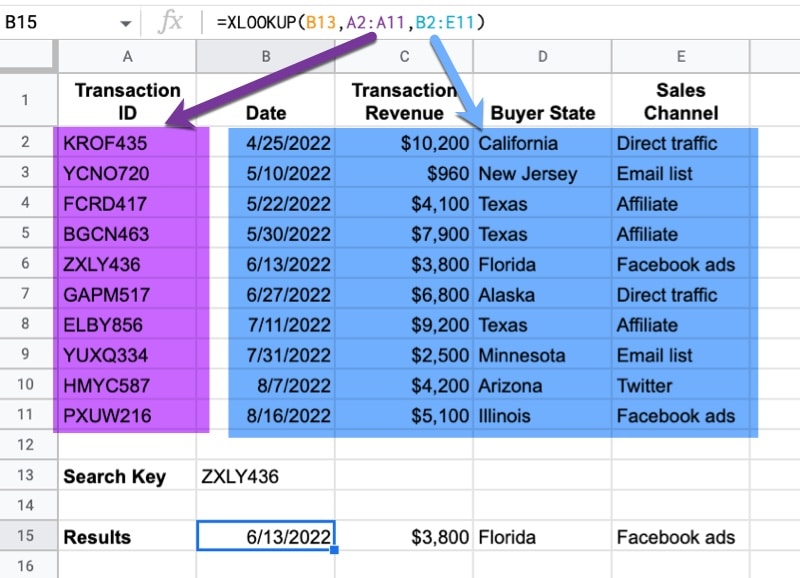 The XLOOKUP can also perform super quick binary searches, but this requires your data to be sorted correctly to avoid incorrect results.

It’s part of the Lookup family of functions in Google Sheets. You can read about it in the Google Documentation.