Let’s see an example. Suppose we want to calculate the total order value for John only: 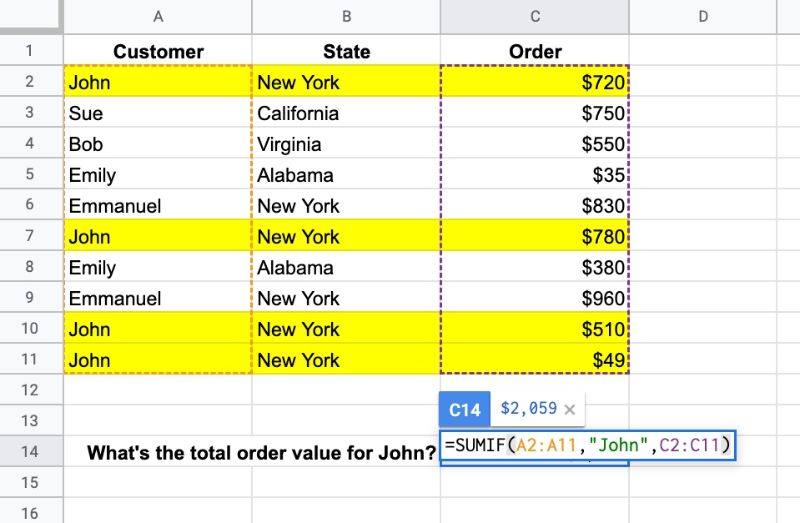 The SUMIF formula that calculates the total order value for John is:

The formula tests column A for the value “John”, and, if it matches John, adds the value from column C to the total. I’ve highlighted the four rows in yellow that are included.

It has two mandatory arguments and one optional argument.

The range is the data that you want to test with your criterion. If the third argument (sum_ragne) is omitted then this range will also be used for the sum.

This is an optional argument that lets you specify a different range to use to calculate the sum total. It must be the same size as the test range.

The following dataset (available in the template below) is used in all the examples that follow: 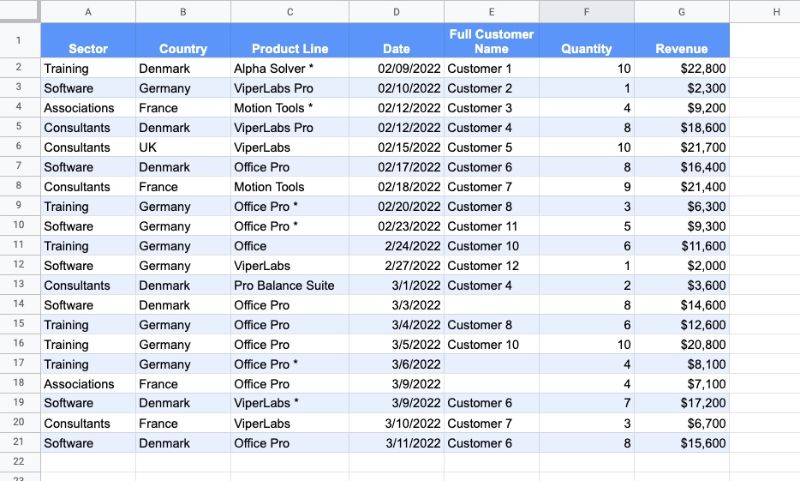 Text criterion must be enclosed by quotes.

This formula calculates the total revenue for Germany:

For example, this formula calculates the total revenue from orders that have exactly 10 items as the quantity:

However, if the criterion includes a logical test, then the formula requires double-quotes.

For example, this formula calculates the total revenue of orders where revenue > $20k:

Notice how this last SUMIF formula does not include the optional sum range. In this case, the conditional range to test is also the range used for the sum.

They must be enclosed with double-quotes.

This formula calculates the total revenue of orders with more than 5 items:

The SUMIF function is case insensitive, so “john”, “JOHN”, or “John” will all produce identical results.

To sum blank cells in a range, use empty double-quotes:

To sum non-blank cells in a range, use the not-equal logical operator “<>“:

The test criterion for SUMIF function can be contained in a different cell (in this example G26) and referenced by the SUMIF formula:

If you want to use a logical operator, then it must still be enclosed in double-quotes. Use an ampersand to combine with the reference cell, e.g.

The tilde ~ is an escape character that lets you search for a * or ?, instead of using them as wildcards.

What’s the revenue from “Pro” products?

This formula finds everything containing “Pro”:

This can be achieved in two ways. Firstly, using a SUMIF for each of the customers and adding them together, like so:

The question mark matches a single character, so only Customers 10, 11, and 12 will match. This is obviously specific to this dataset but illustrates how the question mark works.

The tilde escape character lets you search for a * or ? without the special meaning above being applied.

For example, to calculate the revenue of Office Pro products with a * next to their name in the table above, we use:

The SUMIF function is also covered in Day 2 of my free Advanced Formulas 30 Day Challenge course.

SUMIF is part of the Math family of functions in Google Sheets. You can read about it in the Google Documentation.

For conditional counting, have a look at the COUNTIF function and COUNTIFS function. They work in the same way as SUMIF but count the values that match the criterion.

3 thoughts on “How To Use Google Sheets SUMIF Function”