This article looks at how to add a total row to tables generated using the Query function in Google Sheets. It’s an interesting use case for array formulas, using the {...} notation, rather than the ArrayFormula notation.

So what the heck does this all mean?

It means we’re going to see how to add a total row like this:

using an array formula of this form:

Now of course, at this stage you should be asking:

“But Ben, why not just write the word TOTAL under the first column, and =SUM(range) in the second column and be done with it?”

Well, it’s a good question so let’s answer it!

The reason for using this method is because the total line is added dynamically, so it will be appended directly at the end of the table, and won’t break if the table expands or contracts, if more data is added.

It’ll always move up or down, so it sits there as the final row.

Simple example of how to add a total row

Before we get to the QUERY function example, let’s try a super simple one to understand the mechanics of the array formulas we’re going to be building.

Imagine I have this dataset:

Let’s manually create a total row next to our original table, in cells D1 and E1, like so:

Then we can use this array literal formula, in cell G1, to combine these two tables into a single one:

The syntax is a pair of curly braces and a semi-colon to say the two tables should be combined vertically.

To that end, each table must have exactly the same number of columns.

Now, let’s use another array literal formula to generate that total line. Instead of typing “Total” into one cell, and a number into the adjacent cell, simply create the total line with a single formula:

The syntax is a pair of curly braces and a comma to say the two elements should be combined horizontally.

To that end, each original element must have exactly the same number of rows.

The array literal syntax is slightly different for European Sheets users. Check out this post: Explaining syntax differences in your formulas due to your Google Sheets location

Step 3: Use a SUM formula in total array table

Change the above formula to include a SUM function as follows:

Step 4: how to add a total row to the table with the array

This gives you your answer:

This is purely a presentational step, to make the formula a little more readable inside of the formula bar. Simply add some line breaks (Ctrl + Enter) and indentations:

For this example we’ll use some New York City data, specifically data about how many open positions there are for different agencies within the city. 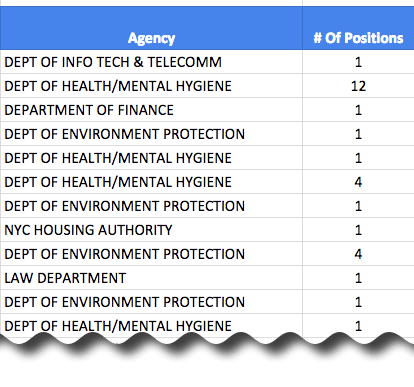 What we’d like to do is summarize the number of positions for each agency, i.e. combine all the agency lines into single lines with a total count for that agency.

We’re “grouping” our data into the categories listed in column A, and adding up all of the values in column B that fall into each group.

To achieve that, we use the QUERY function with a group by clause, to aggregate the number of positions data for each agency: 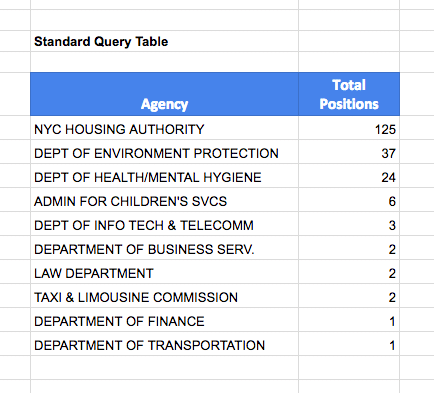 Ok, so far so good. Nothing new to see here.

(Learn about or refresh your memory on the QUERY function here.)

How do we go about adding that total row then?

How to add a total row:

Essentially what we’re doing is exactly the same as the simple example above, creating two separate tables (one is the summary table, like the one above, the other is the total row) and then we use an array formula to combine them into a single table.

Here’s a pseudo formula to illustrate what we’re doing:

and then the Total is actually it’s own array formula as we saw:

so that the final formula, a nested array formula, takes this form:

So let’s go ahead and nest the QUERY function inside of the array formula, with an array SUM formula for the total:

(Optional) Let’s add some line breaks and indentations to make things a little clearer (you can do this in your formula bar too! Use Ctrl + Enter to insert new lines into your formulas and make them more readable):

The following image shows how the different parts of the formula output data in the table, with the array syntax added in red: 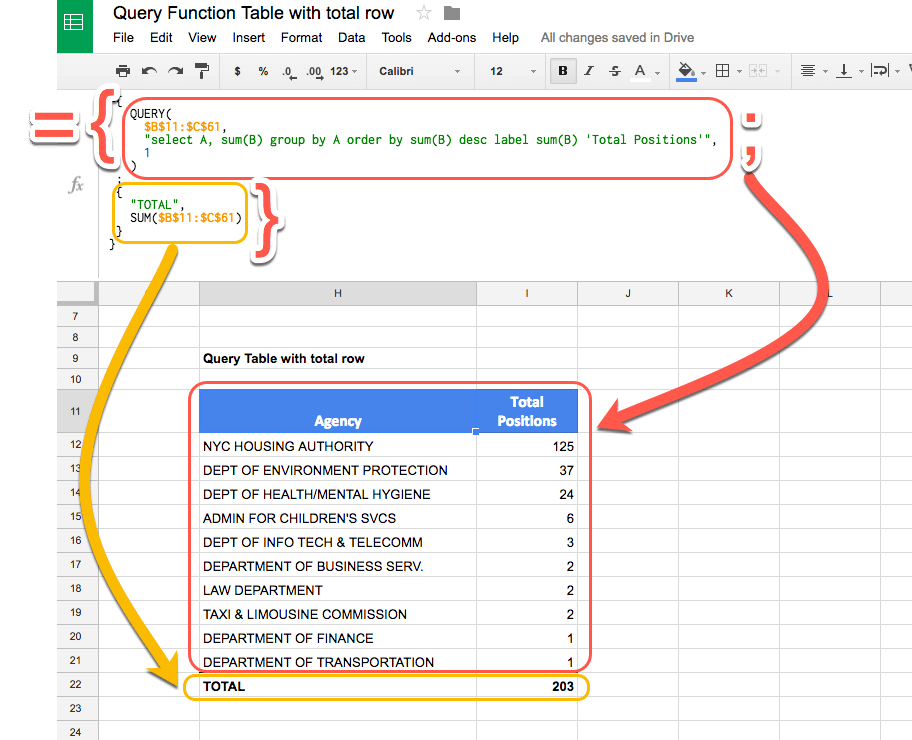 Final step to make it dynamic

There’s one last tweak we need to make if we want it to be dynamic, so that the total row moves up or down as the table expands when we add or remove data, and exhibit behavior like this:

There are two things we need to do: 1) adjust the range to include whole of columns A & B, 2) adjust the QUERY function to remove the blank row that gets added after step 1).

Adjust the range by removing the $61 references so we include the whole of columns A and B. Then tweak the QUERY function by adding a WHERE clause to exclude all the blank rows from column A.

The final function is:

What about if I have a WHERE filter clause?

You need to add that same filter into the total calculation row, to ensure you’re only including the relevant values into your total.

Say for example, we wanted to only show rows beginning with DEPT then we’d use a LIKE filter in our WHERE clause, both the main one and the new one introduced in the total row:

Feel free to make your own copy.