The SPLIT function in Google Sheets is used to divide a text string (or value) around a given delimiter, and output the separate pieces into their own cells.

Let’s see a simple example using SPLIT to separate a list of names in cell A1:

This simple SPLIT formula will separate these names, using the comma as the separator:

The result is 5 cells, each containing a name. Note that one cell looks blank because the text string in cell A1 has two adjacent commas with a space between them. The “space” is interpreted in the same way as the names and contained in the output:

Now watch what happens if we include a space in the delimiter, i.e. ", "

This is probably not the desired behavior.

The third argument is an optional TRUE or FALSE that determines whether SPLIT considers each individual character of the delimiter (TRUE) or only the full combination as the separator to use (FALSE).

In our example, adding FALSE ensures that it only considers the combined comma/space string as the delimiter:

There is a fourth argument too, which is optional and takes a TRUE/FALS value. It determines whether to remove blank cells or not in the output.

To illustrate this, consider this arrangement of data separated by semi-colons. Note the presence of two adjacent semi-colons with no data between them:

The fourth argument determines whether to show or hide the blank cell caused by the two adjacent semi-colons.

To keep the blank cells, add FALSE as the fourth argument:

This is the text string or value in the cell that you want to split. It can also be a reference to a cell with a value in, or even the output of a nested formula, provided that output is a string or value and not an array.

The character or characters used to split the text. Note that by default, all characters are used in the division. So a delimiter of “the” will split a text string on “the”, “he”,”t”,”h”,”e” etc.

This behavior can be controlled by the next argument:

This argument is optional and takes a TRUE or FALSE value only. If omitted, it’s assumed to be TRUE.

The TRUE behavior splits by individual characters in the delimiter and any combination of them. The FALSE behavior does not consider the characters separately, and only divides on the entire delimiter.

The fourth and final argument is optional and takes a TRUE or FALSE value only. If omitted, it’s assumed to be TRUE.

It specifies what to do with empty results in the SPLIT output. For example, suppose you’re splitting a text string with a "," and your string looks like this: “Ben,Bob,,Jenny,Anna”

Between the names Bob and Jenny are two commas with no value between them.

Setting this final argument of the SPLIT function to FALSE results in a blank cell in the output. If this fourth argument is omitted or set to TRUE, then the blank cell is removed and “Bob” and “Jenny” appear in adjacent cells.

There’s an alternative way to split values in a Google Sheet.

Under the Data menu, there’s a feature called “Split text to columns” which will separate single columns into multiple columns, based on the delimiter you specify.

It’s a quick and easy way to split text. 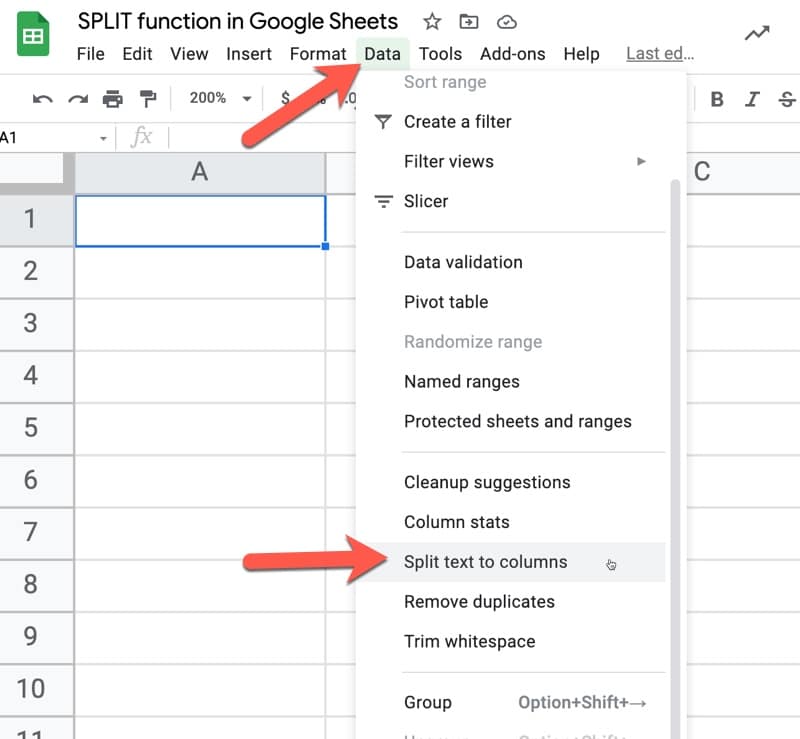 Advanced Examples of the SPLIT Formula in Google Sheets

Extract The N-th Word In A Sentence

If you combine this with a drop down menu using data validation, you can create a word extractor:

Alphabetize Comma-Separated Strings With The SPLIT Function in Google Sheets

Suppose you have a list of words in a single cell that you want to sort alphabetically:

It splits the string of words, applies the TRANSPOSE function to convert into a column so it can be sorted using the SORT function, and then recombines it with the JOIN function.

The SPLIT is useful in more advanced formulas as a way to divide an array into separate elements, do some work on those elements (e.g. sort them) before recombining them with another function, like the JOIN function.

For example, this array formula will add surnames to a list of first names in a cell:

Using the onion framework to analyze this formula, starting from the innermost function and working out, it splits the text string, joins on the surname “Smith”, trims the excess trailing space with the TRIM function, and finally outputs an array by using the Array Formula.

Suppose you want to find unique values from data that looks like this: 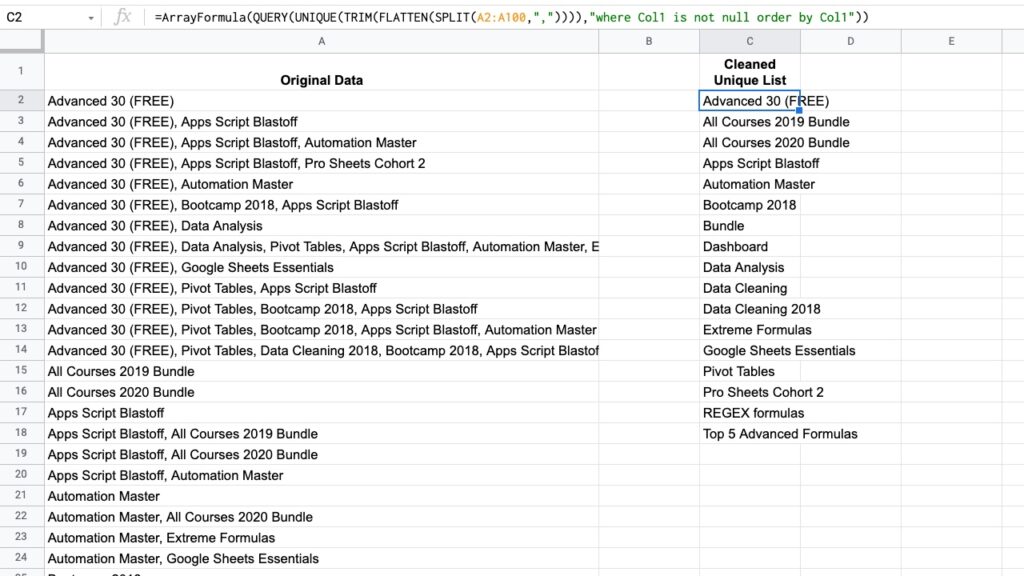 You want to extract a unique list of items from the column containing grouped words, which are separated by commas.

Use this formula to extract the unique values:

Read more about this technique in this post: Get A Unique List Of Items From A Column With Grouped Words

The SPLIT function in Google Sheets is used in a number of the complex IMPORT formulas for retrieving social media statistics into your Google Sheet.

The SPLIT function was combined with the FLATTEN function in this exceedingly wacky unpivot formula in Google Sheets:

All in all, SPLIT is a useful function!