This post shares my solution to a problem that I faced myself recently.

I needed the unique list of items from a column containing grouped words, separated by commas.

The data was in this format: 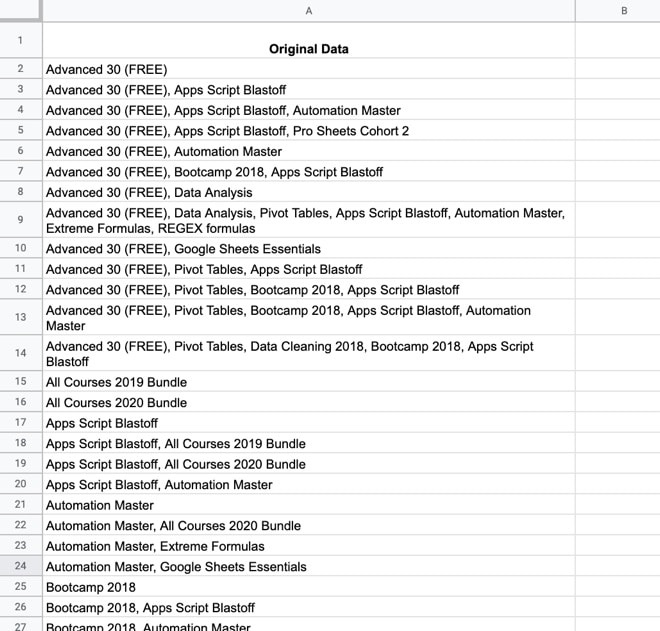 As you can see, it’s a list of my online courses, but many of the rows contain more than one item, separated by commas.

Ultimately, I want to transform the data into this format: 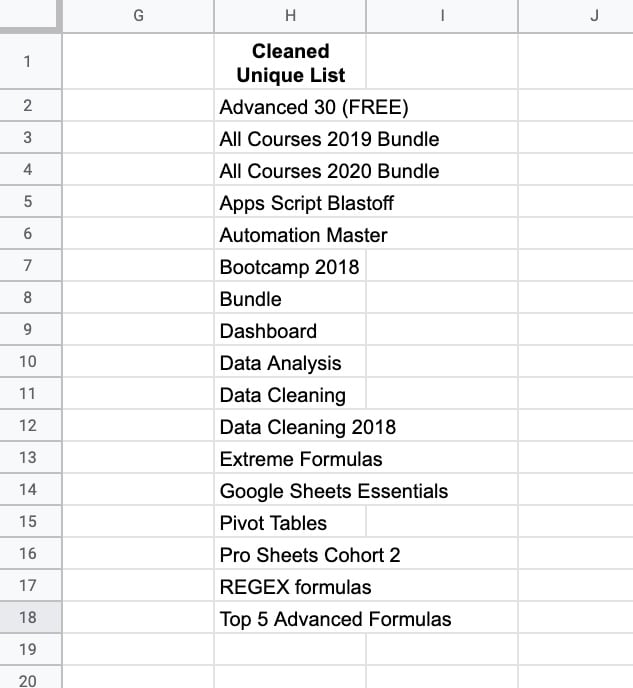 Enter this formula in a blank column to create the unique list of items:

How Does This Work?

Let’s use the onion method to peel the formula apart.

Start with the innermost SPLIT function to separate items in the rows with multiple items:

We’re telling the SPLIT function to separate items based on the commas.

Turn this into an array formula to capture all of the original rows:

Next, add the FLATTEN function to combine all the columns into a single column:

Then add the TRIM function to remove any superfluous whitespace around the text values, to ensure we can remove duplicates:

Wrap the formula with the UNIQUE function, which will remove the duplicate values:

Finally, we’re ready to extract the unique list of items 😉

Add the QUERY function as the final layer, to sort the data and remove the blank row:

One interesting thing you’ll notice about this QUERY function is that it doesn’t contain a SELECT keyword. That’s because I’m selecting all of the columns, so, for brevity, I omitted the SELECT statement.

The QUERY statement is functionally equivalent to:

"select * where Col1 is not null order by Col1"

You’ll also notice that the QUERY statement uses the Col1 notation, rather than referring to columns with A, B, C notation. That’s because the data input for the QUERY function is generated by another function, nested inside the QUERY.