I’m talking about the idea that complex formulas in Google Sheets are a lot like onions.

And they sometimes make you cry. ?

The Onion Method For Complex Formulas

If you’re building complex formulas, then I advocate following a one-action-per-step approach.

What I mean by this is that you build your formulas in a series of steps, and only make one change with each step.

The Onion Method is a framework by which to approach hard formulas, and consists of these three elements:

This lets you see the formula progress in an incremental way and is really helpful when you’re building or tyring to understand complex formulas.

Sometimes a step might result in an error (typically a #N/A or #REF!), but that’s ok, provided it gets fixed in a subsequent step, as shown in this SUMPRODUCT example:

Each of these intermediary formulas in the above image moves us forward incrementally, until the final answer is obtained in step 6.

Similarly, if you’re trying to understand complex formulas, peel the layers back until you reach the core (which is hopefully a function you understand!). Then, build it back up in steps to get back to the full formula.

Let’s look at importing data from the table on this Wikipedia page of largest cities by population.

NOTE: Since this article was written in 2019, the Wikipedia page has been updated and the live formulas and screenshots no longer work as shown. I will update when I can.

Open a new Google Sheet (bonus points for using the browser shortcut and just typing Sheets.new into your browser window).

Step 1 is a standard IMPORTHTML function to retrieve the city table from Wikipedia. In cell A2:

The data has some issues, but it’s a start.

In Step 2, we use the INDEX function to grab just the population column.

Per The Onion Method, we insert this next step in a new cell, cell J2, to the right of the existing data, in this example: 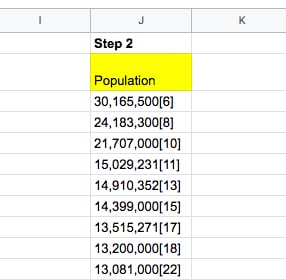 which returns the entire column.

We’ll deal with the population column on its own and come back to our main formula later.

Hmm, that population column is messed up! Regex to the rescue!

Using the REGEXEXTRACT function, extract just the numbers and “,” from the data, before the citations in brackets:

Turn this into an Array Formula and get the column of population numbers! 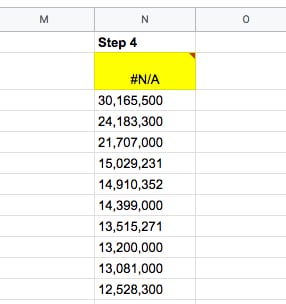 We still have two problems to solve though: i) we need to convert the strings into actual numbers and ii) we need to fix the #N/A column heading…

We can multiply by 1 (see the “*1” at the end of our formula), which coerces those text strings into actual numbers. 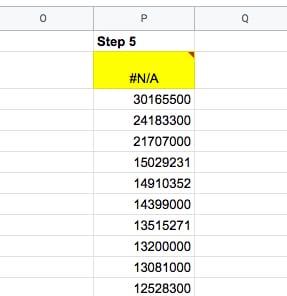 Use the IFERROR function to fix that pesky #N/A error at the top of our column heading, and replace the #N/A with the word “Population”:

Nice, now we have our population column as numbers: 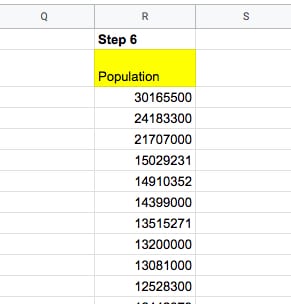 Pick the other columns we want, by wrapping the IMPORTHTML function with a QUERY function.

Note that we have to use the Col1 notation rather than the column letter in our Select statement, since we’re nesting another function as our data source in the QUERY function. 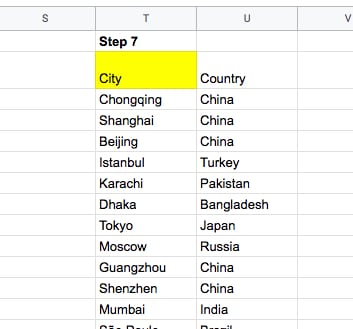 All that’s left is to join these two ranges using the curly bracket notation, like this:

(Shown with line breaks to illustrate the two ranges.) 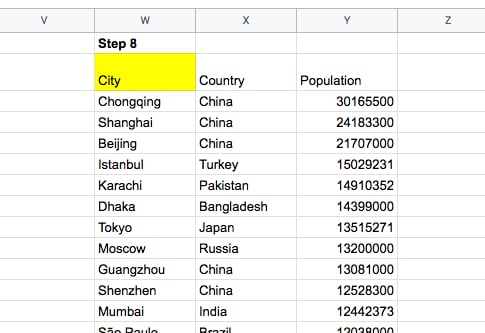 If you’re trying to understand complex formulas in Google Sheets that someone else has shared with you, you can still approach it with this Onion Method.

Simply peel back the layers until you reach the innermost function. Copy that into a new cell and start from the inside and work out, building up to the full formula again.

Suppose we’re given this worksheet with US State names: 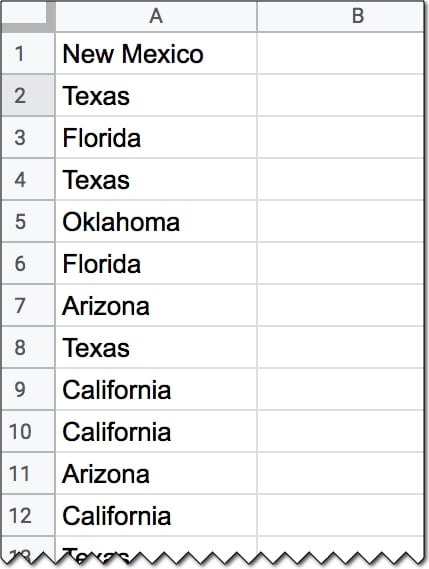 And we’re also given this formula:

which gives an output of Texas.

But how does this formula work?

Applying The Onion Method, we peel back the layers to the core function, and then build it up in steps again.

In a new cell, add the innermost MATCH function:

which outputs an array of the position of the first occurrence of the words in column A. We see a 2 next to every occurrence of Texas for example, because the first time it occurred was in position 2.

Now, we wrap it with the MODE function to find the most frequently occurring position:

By definition, the MODE function takes a range of numbers for an input and finds the most commonly occurring value.

However, what happens if we have a range of text values and want to find the most frequent?

In this case, the MATCH has been used to create a range of numbers for the MODE function.

By now, we’ve probably deduced that this formula finds the most frequent word in a list.

Finally, we can retrieve the actual text value, i.e. the most frequent State name, by adding the INDEX function to get the full original formula, like this:

This will give the output Texas in this specific example.

Complex Formulas Onion Method Template For Your Use

Click here to open a read-only copy of the template >>

This template contains both examples from this tutorial.

To make your own editable copy, please go to File > Make a copy… under the File menu.

The Onion Method is a framework that allows you to approach complex formulas in a systematic way.

Even if you’re presented with an “impossible” challenge to answer or an “impossible” formula to decipher, just follow this framework. If required, peel back the layers and then work from the inside out in an incremental fashion.

You’ll be amazed at how quickly your understanding of challenging formulas broadens and deepens. You’ll encounter and understand brand new functions that you’ve never heard of before. Plus, you’ll find out all sorts of secret tricks with existing formulas.

Who knows, you might even cry tears of joy instead of despair…

I’ll leave you with this quote from businesswoman Belinda Johnson:

I like cutting through complexity and trying to get to the kernel of an idea.

23 thoughts on “Use The Onion Framework To Approach Complex Formulas”