You sent out a Google Forms survey to your customers and received hundreds of responses.

They’re sitting pretty in a Google Sheet but now you’re wondering how you can possibly reply to all those people to say thank you.

Manually composing a new email for each person, in turn, will take forever. It’s not an efficient use of your time.

You could use an ESP like Mailchimp to send a bulk “Thank You” message, but it won’t be personal. It’ll be a generic, bland email and nobody likes that. It won’t engage your customers and you’ll be missing an opportunity to start a genuine conversation and reply to any feedback from the survey.

Thankfully, there is another way.

Of course, there is, otherwise, why would I be writing this tutorial! 😉

By adding a reply column to your Google Sheet, next to the Google Forms survey responses, you can efficiently compose a personal response to every single survey respondent.

Then, using Google Apps Script (a Javascript-based language to extend Google Workspace), you can construct an email programmatically for each person, and send out the responses in bulk directly from your Google Sheet.

I recently sent a short questionnaire to my list, asking for volunteers to test out a course.

I was blown away by the interest level, with over 270 responses. I wanted to email everyone individually to say thank you for expressing their interest and sharing their feedback.

I needed a smart way to do that and the end result was this tool, which I wanted to share with y’all.

Here’s an animated GIF of a split screen, showing the Google Forms survey being submitted and the response Sheet receiving the data:

And here’s an animated GIF of a split screen, showing the email tool automatically sending 3 emails from my Google Sheet to my Outlook email address:

As you can see in the GIF, the tool adds a date to the final “Status” column of my Google Sheet, indicating that the reply email has been sent.

So how do we build this?

This step is pretty straightforward.

Create your survey with Google Forms (here’s the quick demo form I built for this tutorial).

Be sure to ask for a name and to toggle the “Collect Emails” option in the Settings menu:

Here’s a shot of the finished demo form: 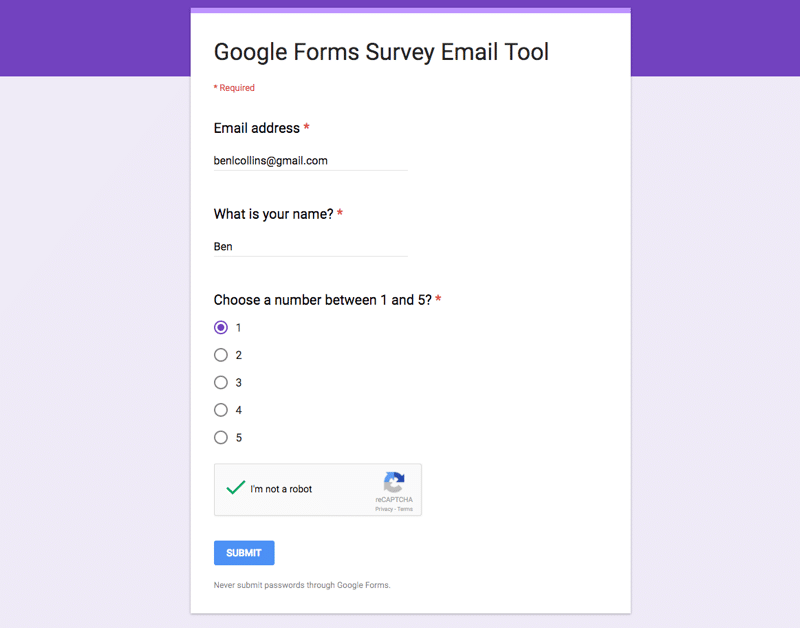 Once you’ve created your Survey form, submit it at least once so you have a response showing.

Step 2: Set up the responses Sheet

Next, click create a new spreadsheet, which will be created in the same Drive folder as your Form:

Find this new Sheet and open it. It’ll look something like this:

Insert 2 columns to the right of your last Form Response data column.

In this example I want to add two new, blank columns to the right of Column D. Do this by highlighting column D (click the D column heading), right clicking, and choosing Insert 1 Right twice.

The first new column, column E, I call “Custom Reply” and the second, column F, I call “Status”, so that my Sheet now looks like this:

I colored the two new columns as well, to distinguish them from the Form response data.

That’s it with this Sheet. Open the Script Editor (under Tools menu) ready to add the code…

Before committing pen to paper, or lines of code to git, let’s think through what this program needs to do:

Here’s the Google Apps Script code to paste into the Script Editor of your Sheet (Tools > Script editor…):

The code is here on GitHub.

This code is specific to my example, so you’ll need to adjust the row[headerIndexes[…]] references:

row[headerIndexes["Choose a number between 1 and 5?"]]

to match the column headings in your responses Sheet.

Briefly, this is how the program works:

Lines 2 – 8 add the custom menu to our Google Sheet, so we can run the program from there.

Lines 15 – 28 get all the response data out of the sheet, called Form Responses 1, and create an index of the column headers.

Lines 30 – 48 are the meat of the program, where the script loops over each row of data with the forEach method, checks whether an email has been sent (line 31) and if not, creates an email (lines 32 – 40) with a fixed opening and closing lines and the custom message in between, sends it (line 42) and prints out a date in the status column (line 43).

Lines 57 – 77 is the function to create an index of headers from our data.

Lines 85 – 97 is the function we call to actually send the email using GmailApp service.

Apps Script quotas will permit you to send up 100 emails/day on the free consumer plan. If you have more respondents than that in your Sheet, the program will stop where it is, and give you the following error message:

You’ll have to wait 24 hours before you can send your next batch of emails, the program picking up where you left off.

You can also upgrade to G Suite for Work and your email Apps Script quota rises to 1,500 emails/day.

In your Script Editor window, select and run the onOpen() function:

This will add a menu to your Sheet tab, so that you can run your email script from your Sheet.

Next, write all your custom replies in the cells adjacent to the feedback for each row:

When you’re ready to go, use the new custom menu to run the email function.

If it works, it should insert a date stamp into that final status column to indicate when the email was sent.

Check your sent mail folder of your Gmail account and you should see a bunch of sent messages!

If you send an initial test email to yourself (highly recommended), then it should look something like this: 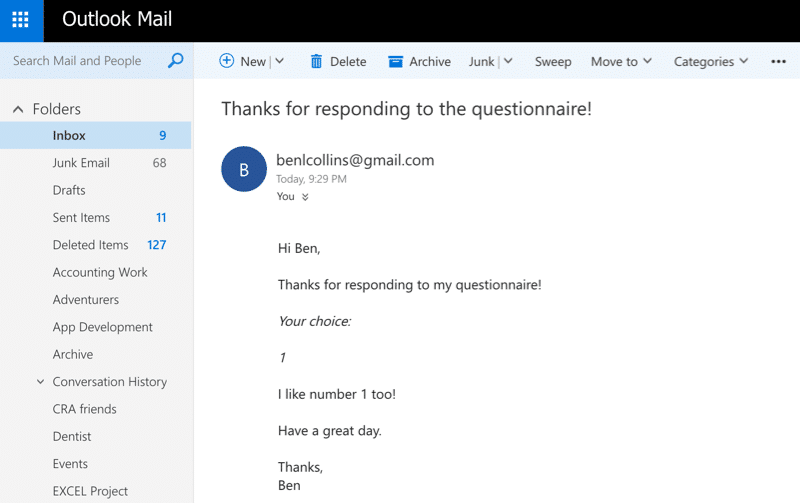 Questions? Comments? Improvements? Let me know in the comments below!