What is Google Apps Script?

Google Apps Script is a cloud based scripting language for extending the functionality of Google Apps and building lightweight cloud-based applications.

What does this mean in practice?

It means you use Apps Script to write small programs that extend the standard features of Google Apps. I like to say it’s great for filling in the gaps in your workflows.

For example, I used to be overwhelmed with feedback from my courses and couldn’t respond to everyone. Now, when a student submits their feedback, my script creates a draft email in Gmail ready for me to review. It includes all the feedback so I can read it within Gmail and respond immediately.

It made a previously impossible task manageable.

With Apps Script, you can do cool stuff like automating repetitive tasks, creating documents, emailing people automatically and connecting your Google Sheets to other services you use.

In this Google Sheets script tutorial, we’re going to write a script that is bound to our Google Sheet. This is called a container-bound script.

(If you’re looking for more advanced examples and tutorials, check out the full list of Apps Script articles on my homepage.)

Then click the menu Tools > Script editor... to open a new tab with the code editor window.

This will open a new tab in your browser, which is the Google Apps Script editor window: 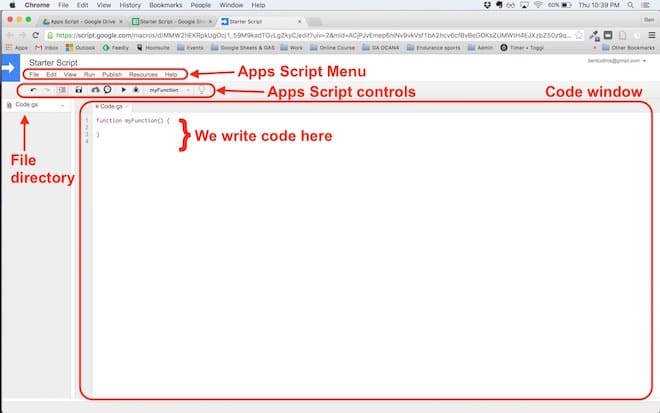 In the code window, between the curly braces after the function myFunction() syntax, write the following line of code so you have this in your code window: 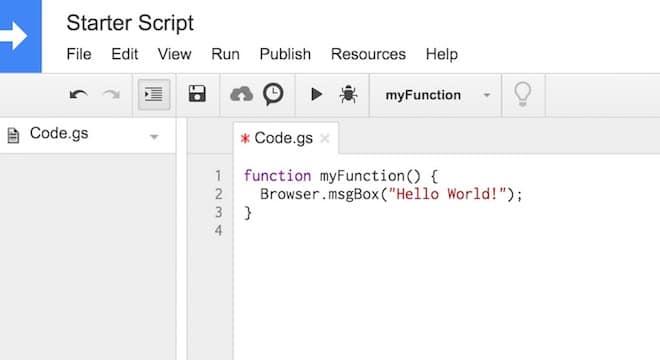 Google Scripts have robust security protections to reduce risk from unverified apps, so we go through the authorization workflow when we first authorize our own apps.

When you hit the run button (the black triangle) for the first time, you will be prompted to authorize the app to run: 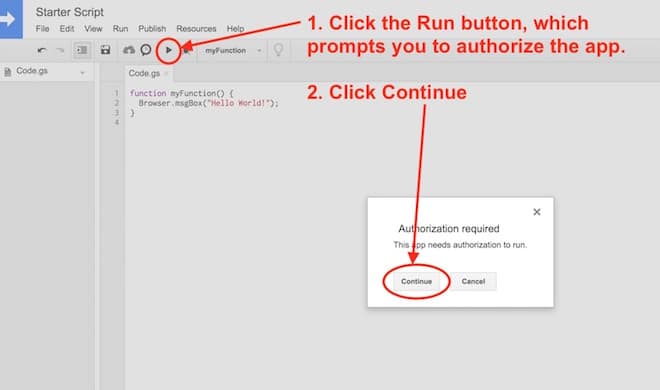 Clicking Continue pops up another window in turn, showing what permissions your app needs to run. In this instance the app wants to view and manage your spreadsheets in Google Drive, so click Allow (otherwise your script won’t be able to interact with your spreadsheet or do anything): 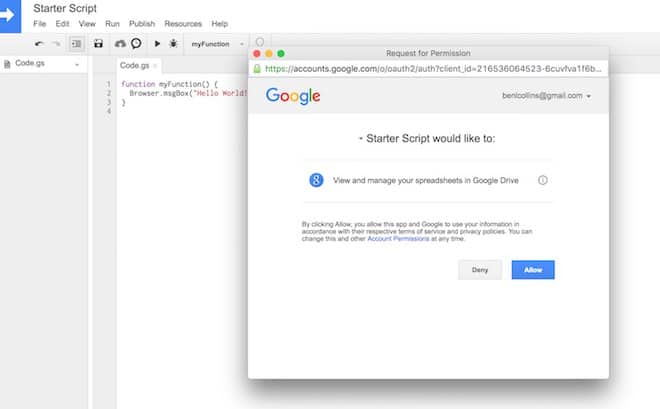 ❗️When your first run your apps script, you may see the “app isn’t verified” screen and warnings about whether you want to continue.

In our case, since we are the creator of the app, we know it’s safe so we do want to continue. Furthermore, the apps script projects in this post are not intended to be published publicly for other users, so we don’t need to submit it to Google for review (although if you want to do that, here’s more information).

Click the “Advanced” button in the bottom left of the review permissions pop-up, and then click the “Go to Starter Script Code (unsafe)” at the bottom of the next screen to continue. Then type in the words “Continue” on the next screen, click Next, and finally review the permissions and click “ALLOW”, as shown in this image (showing different script):

More information can be found in this detailed blog post from Google Developer Expert Martin Hawksey.

Running a function in Apps Script

Once you’ve authorized a Google App script, the function will run (or execute). You will see two status messages to tell you what’s happening.

And then this one:

If anything goes wrong with your code, this is stage when you’d see a warning message (instead of the yellow message, you’ll get a red box with an error message in it).

Now, assuming you got those two yellow status messages and they’ve both automatically disappeared from view, then your program has run successfully. Click back on the browser tab with your spreadsheet (most likely the tab to the left of the one we’re in).

You should see the output of your program, a message box popup with the classic “Hello world!” message: 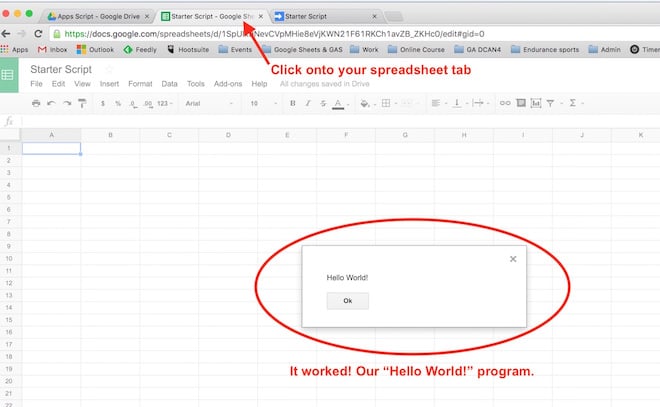 We should rename our function to something more meaningful.

At present, it’s called myFunction which is the default, generic name generated by Google. Every time I want to call this function (i.e. run it to do something) I would write myFunction(). This isn’t very descriptive, so let’s rename it to helloWorld(), which gives us some context.

So change your code in line 1 from this:

In its current form, our program is pretty useless for many reasons, not least because we can only run it from the script editor window and not from our spreadsheet.

Let’s fix that by adding a custom menu to the menu bar of our spreadsheet, so that a user can run the script within the spreadsheet without needing to open up the editor window.

This is actually surprisingly easy to do, requiring only a few lines of code. Add the following 6 lines of code into the editor window, above the helloWorld() function we created above, as shown here:

If you look back at your spreadsheet tab in the browser now, nothing will have changed. You won’t have the custom menu there yet. We need to re-open our spreadsheet (refresh it) or run our onOpen() script first, for the menu to show up.

To run onOpen() from the editor window, first select the onOpen function as shown in this image: 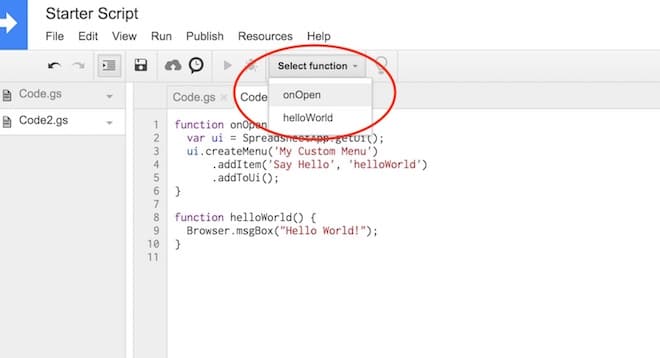 Once you’ve selected the onOpen function, the small triangle button will change from light gray to black, meaning it can be clicked to run your chosen function:

Now, when you return to your spreadsheet you’ll see a new menu on the right side of the Help option, called My Custom Menu. Click on it and it’ll open up to show a choice to run your Hello World program:

An alternative way to run Google Scripts from your Sheets is to bind the function to a button in your Sheet.

For example, here’s an invoice template Sheet with a RESET button to clear out the contents:

For more information on how to do this, have a look at this post: Add A Google Sheets Button To Run Scripts

The goal is to be able to have two place-names in our spreadsheet, and type the new function in a new cell to get the distance, as follows:

The solution should be:

Let’s take a look at another simple use case for this Google Sheets Apps Script tutorial.

Here, I’ve setup an importxml function to extract the number of followers a specific social media channel has (e.g. in this case a Reddit channel), and I want to save copy of that number at periodic intervals, like so:

In this script, I’ve created a custom menu (as we did above) to run my main function. The main function, saveData(), copies the top row of my spreadsheet (the live data) and pastes it to the next blank line below my current data range as text, thereby “saving” a snapshot in time.

The code for this example is:

See this post: Saving Data in Google Sheets, for a step-by-step guide to creating and running this script.

Google Apps Script is by no means confined to Sheets only, and is equally applicable in the Google Docs environment. Here’s a quick example of a script that inserts a specific symbol or text string into your Doc wherever your cursor is:

We do this using Google App Scripts as follows: 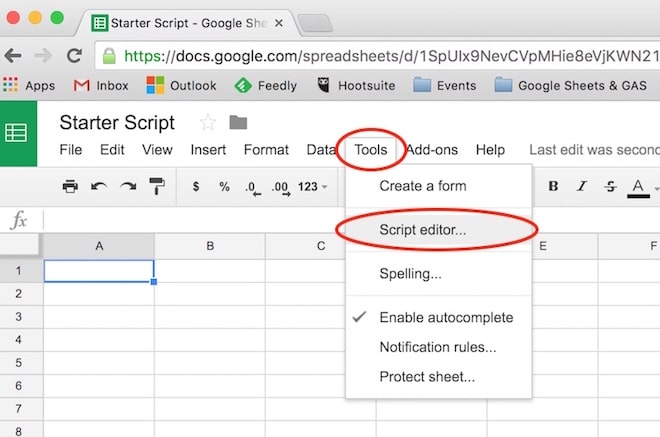 4. In the newly opened Script tab, remove all of the boilerplate code (the `myFunction` code block)

5. Copy in the following code:

6. You can change the special character in this line

to whatever you want it to be, e.g.

7. Click Save and give your script project a name (doesn’t affect the running so call it what you want e.g. Insert Symbol)

8. Run the script for the first time by clicking on the menu: Run > onOpen

9. Google will recognize the script is not yet authorized and ask you if you want to continue. Click Continue

10. Since this the first run of the script, Google Docs asks you to authorize the script (I called my script “test” which you can see below): 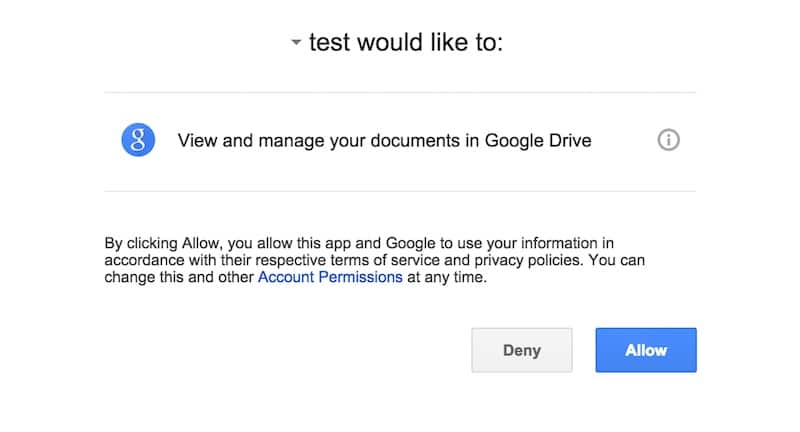 12. Return to your Google Doc now.

13. You’ll have a new menu option, so click on it:
My Custom Menu > Insert Symbol

14. Click on Insert Symbol and you should see the symbol inserted wherever your cursor is.

Use the Logger class to output text messages to the log files, to help debug code.

The log files can be accessed after the program has finished running, by going to View > Show Logs (or Cmd + Enter, or Ctrl + Enter (on PC)).

The syntax in its most basic form is Logger.log(something in here). This records the value(s) of variable(s) at different steps of your program.

For example, add this script to a code file your editor window:

Run the script in the editor window, then View > Show Logs and you should see: 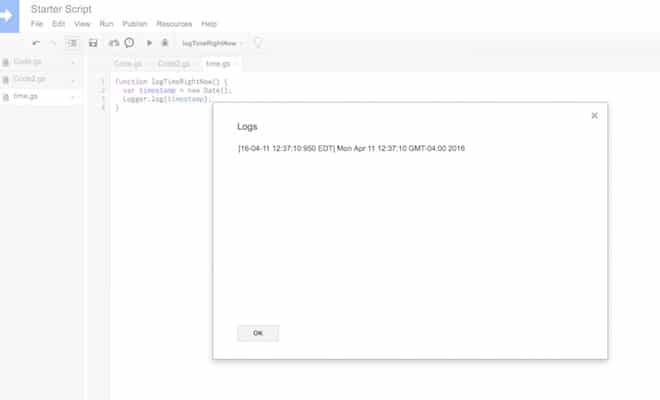 Real world examples from my own work

I’ve only scratched the surface of what’s possible using G.A.S. to extend the Google Apps experience.

Here’s a couple of interesting projects I’ve worked on:

1) A Sheets/web-app consisting of a custom web form that feeds data into a Google Sheet (including uploading images to Drive and showing thumbnails in the spreadsheet), then creates a PDF copy of the data in the spreadsheet and automatically emails it to the users. And with all the data in a master Google Sheet, it’s possible to perform data analysis, build dashboards showing data in real-time and share/collaborate with other users.

2) A dashboard that connects to a Google Analytics account, pulls in social media data, checks the website status and emails a summary screenshot as a PDF at the end of each day. 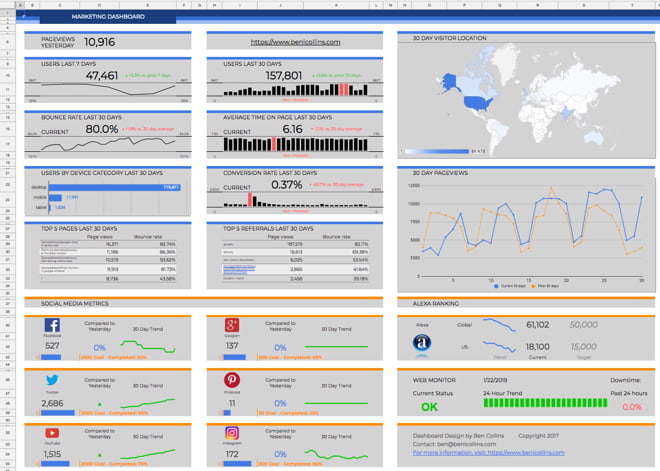 3) A marking template that can send scores/feedback to students via email and Slack, with a single click from within Google Sheets. Read more in this article: Save time with this custom Google Sheets, Slack & Email integration

My own journey into Google Apps Script

My friend Julian, from Measure School, interviewed me in May 2017 about my journey into Apps Script and my thoughts on getting started:

For further reading, I’ve created this list of resources for information and inspiration: 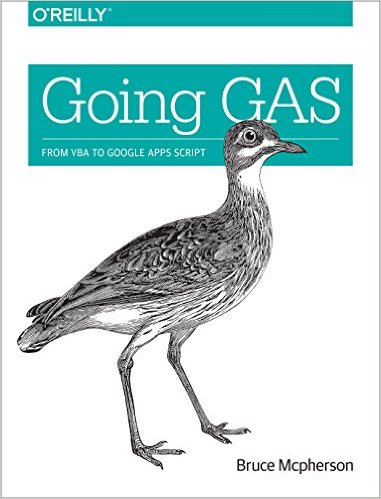 Going GAS by Bruce Mcpherson is a newly published (i.e. bang up-to-date as of April 2016) book covering the entire GAS ecosystem, with a specific focus on making the transition from Office/VBA into Google Apps/GAS. Even if you don’t use Office or VBA much or at all, it’s still a very useful resource. It’s been a few years since I’ve done any serious VBA work, but I still found the book very helpful and a great overview of the GAS environment.

Imagination and patience to learn are the only limits to what you can do and where you can go with GAS. I hope you feel inspired to try extending your Sheets and Docs and automate those boring, repetitive tasks! 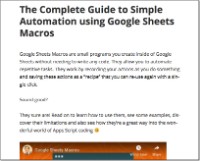 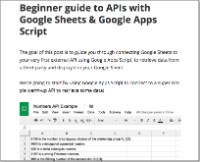 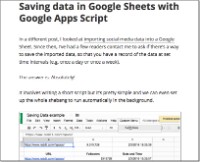